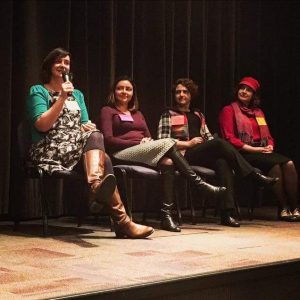 I met meteorologists, engineers, software developers, researchers, pathologists, pharmacists, biologists, a trainee mechanic and lots of physicists! What stood out as we introduced ourselves was the number hats people wore. For example, “I’m an environmental engineer by day and my partner and I are raising money for our start-up…” or “I’m a research scientists, I teach at university, and volunteer at…” The other common thread was that very few career paths were straight lines. The word du jour – ‘pivot’ – was overheard more than once! END_OF_DOCUMENT_TOKEN_TO_BE_REPLACED

Thanks to Flying Solo, I scored free registration to the Small Business Big Marketing session at Victoria’s Small Business Festival this morning. END_OF_DOCUMENT_TOKEN_TO_BE_REPLACED Clare Bowditch is singing Amazing Life while I write this. Yep, just to me! On repeat, the poor thing.

She also played it on Saturday in response to a question at the Big Hearted Business morning tea I attended. END_OF_DOCUMENT_TOKEN_TO_BE_REPLACED